The majority of this 6 piece work, Jnana-Vijnana was inspired by an event, in 2012, shortly after I attended a Self-realization seminar with a guru from India, Pujyashree Deepakbhai.  That year I had been investigating Schopenhauer vis a vis Wagner and Zen philosophy, eventually leading to regular practice of Yoga and meditation.  I had a very strong experience at the seminar, and that culmination yielded the composition and first track entitled Transfigured.

The next track Ebb and Flow, represents to me the undercurrents of discovery, and the ferment of the phasic process common to all physical and nonphysical things.  The piece features solo piano to start, with a mysterious undulating representation of the theme.  As the composition unfolds, more voices are introduced while the theme grows stronger and more visceral until its final decay.

As the Clouds Depart is a short tone poem and a classical form, featuring two guitars, compositionally inspired by Scriabin’s Etudes .  The piece was written shortly after returning to the respite of my Pennsylvania home, after a series of challenging experiences in New York City.

Of Distant Lands is another slowly developing piece largely inspired by the mountainous landscapes of the Lehigh Valley, PA, fueled by the dreamlike sense of hope and wonder they represent to me.  The piece climbs steadily towards a swirling peak, and a nostalgic reintroduction of past themes with new character.

Unraveled speaks about internal conflict.  The piece begins threadbare and chaotic, a gnawing psyche in unrest, and as the theme enters, desperate and searching, heavy clouds begin to mobilize. The themes and underpinning come together in an adrenaline rush of clarity and exhilaration, still searching but with newfound resolve.

The final track, Soar describes a kind of dream of flight, with lilting rhythms and hanging or ‘soaring’ melody. The pieces glides forward meeting variable winds and a miraculously auspicious landing.

“Dan Wilkins—though young in years and experience—has been successful in not only composing the profound and enlightening music on this record, but in projecting his ideas into his fellow bandmates, each whom played their parts to perfection.” James Nadal (allaboutjazz.com) 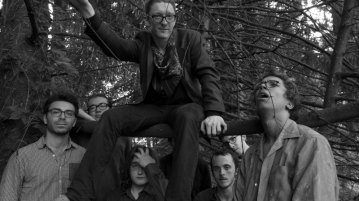